21 March, 2016 - Switching to solar power is a smart choice for homeowners in the sunny Northland who, in some areas, are paying close to 30% more for their grid power than most Kiwis, says the head of solarcity, New Zealand’s leading energy services company.

“With the combination of high sunshine hours and high power power prices, Northland has the potential to become the solar capital of New Zealand,” says solarcity CEO Andrew Booth.

A 2010 report titled Sustainable Futures 30/50 identified “considerable potential” in Northland and Whangarei to increase the use of solar energy but said the biggest barrier for the large scale uptake was the high cost of the technology.(1)

Following a price and technology breakthrough, Booth says his company has removed that price barrier so homeowners can go solar for little, or no capital costs and beat the rising cost of power with its smart solarZero energy service launched today in Northland.

“This is the first-of-its-kind way of going solar in Northland. Rather than selling you a solar system, we sell solar energy generated by our panels which we pay for and install on your roof. We also pay for product insurance and any repairs.”

“You simply pay a low, fixed monthly fee for energy services, guaranteed for 20 years, providing inflation-free solar power that can save you thousands of dollars on your power bills over the long term.

“We’ve made it possible for many homeowners in Northland to switch to solar electricity for their daytime power needs, at a price that is less than what they are currently paying their energy retailer. 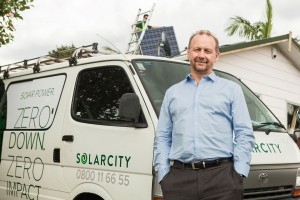 The cost of grid power in New Zealand has risen by more than 150% in the last 20 years. In some parts of Northland, like Kerikeri, homeowners are paying about 30% more for power than the average price.(2) A number of power companies have announced price rises from next month (3) and Northland may also be hit by a 10% hike later this year following a review of electricity transmission pricing.(4)

“We do not understand why Northland families pay up to $1200 a year more for power than households in Christchurch with the same energy retailer. It is time for change, it’s time to stop switching between power companies in search of savings – switch to solar. Problem solved. Money saved.”

As a product extension to solarZero, battery storage can be added which means surplus solar power generated during the day can be stored and used at night and when power prices are high.

solarcity has partnered with McKay to deliver a complete integrated service for Northland. As Northland’s leading and most trusted electrical contractor, McKay will install and maintain solarcity’s systems across the region, with the first four being installed this week.

Lindsay Faithfull of McKay says; “We have been in business for 80 years across Northland serving our community and watching many struggle to pay power costs. We are proud to bring this new clean energy service to our region to help do the right thing by the environment and save money for our communities.”

To celebrate the Northland launch customers who sign up with solarcity by March 31 will be sent 20 free LED light bulbs, as a thank you once their solar is up and running. Switching to 20 energy efficient LEDs can save a household $5,800 in energy costs over their 15-year lifetime.

Homeowners interested in solarcity’s services can visit solarcity online at or call 0800 11 66 55.

Written and released by solarcity.