On Wednesday night, McKay was presented with the Award of Excellence to Industry from the Minister of Defence in recognition of the company's outstanding commitment to the Defence industry. 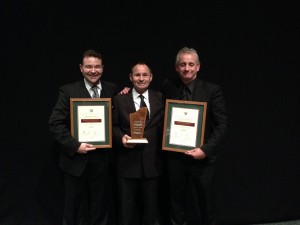 McKay were nominated in September for the electrical installation of the Integrated Platform Management System and the Heating, Ventilation and Air Conditioning system on board the ANZAC Class Frigates; as well as various upgrades, maintenance and defect rectifications on the Inshore and Offshore Patrol Vessels.

Lindsay Faithfull Chief Executive Officer of McKay, received the award on behalf of McKay during the Annual NZDIAC Defence Industry Awards in Wellington at the TSB Arena. During his acceptance speech, Lindsay said that McKay were proud to be a part of the New Zealand Defence Industry and honoured to be contributing to the defence of country.

McKay were also finalists in Category B – the provision of superior services to Defence.

Many other category winners were announced on the night and reflect the depth and talent of New Zealand’s innovators and organisations in the defence industry.