McKay has been appointed by main contractor CPB Contractors. The build currently has over 130 contractors on site – with this number expected to reach 700 during the peak construction period. Many of these contractors are local, with McKay taking the lead in electrical works due to their local Waikato presence coupled with their ability to deliver multi-million-dollar electrical construction works. 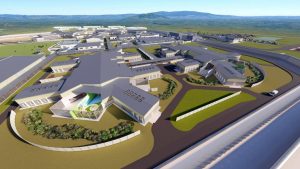 The size and complexity of the build required an electrical contractor with a track record in large-scale builds including prisons and an aptitude for innovation. McKay was able to offer a complete in-house solution with added value engineering. McKay’s scope of work encompasses all electrical services for the Waikeria Prison development, including supply of transformers, main switchboards and distribution board

Project Manager, Richard Harrison, is relocating from Christchurch to manage the contract: “this is an exciting time both for myself and McKay as the Waikeria Prison development project requires an extensive and innovative electrical solution. With a history in large build projects and electrical works for prisons, this contract was a natural fit for McKay and we are looking forward to works commencing on site and working closely with CPB.”

Work has started with the enabling works currently underway, McKay is assisting with ducts and earthing system installation into concrete foundations. The rest of the electrical works will happen during the construction phase which is expected to kick off in February/March next year.

Lindsay Faithfull, Managing Director at McKay said: “we are excited to be taking on another large-scale New Zealand construction project and are looking forward to again working with CPB Contractors to achieve a complex build. We are unique in that we are able to offer multifaceted electrical solutions that achieve maximum efficiency and value and we are pleased to be supporting the Department of Corrections in the delivery of a world-class facility.”