Our Hamilton branch has just completed an LED lighting combined with street lighting project on a new timber swing bridge that forms part of the walkway and cycling path in Tamahere, on the outskirts of Hamilton. 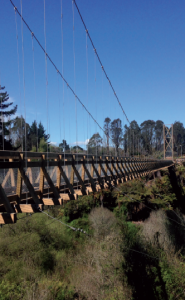 Not only does the bridge form a critical part of the district’s walking and cycle tracks by crossing the Mangaharakeke stream and linking up the Tamahere and Matangi communities, it also spans the habitat of a very special native long-tailed bat. The bat is one of New Zealand’s only two remaining species of native land mammals and its numbers are declining. It was important then that the swing bridge also be designed to accommodate bats. McKay’s clever LED lighting system turns on as a walker or cyclist approaches, lights ahead as they cross and turn off as they leave. This limits the bats’ exposure to the lights, enabling them to navigate their way with minimal interference. Allan Turner would have been a happy man.