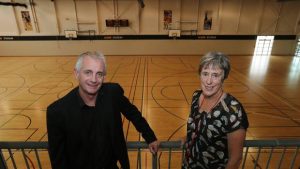 Having previously been sponsored by ASB and Genesis Energy, McKay is the first local sponsor since the Northern Advocate naming rights to the stadium finished in 2004. Both McKay and Sport Northland have deep roots in the area, so the historic significance of the sponsorship is certainly exciting for locals.

“Having grown up playing and coaching rugby on Kensington Park, it is my absolute privilege to announce that McKay Ltd will be sponsoring Kensington Stadium. McKay has expanded significantly over the last 5 years and we are now a 500+ people company, therefore it is important for us to share this success with our community.

Whilst McKay has expanded across New Zealand, our head office and company roots remain in Northland, so this is a partnership that epitomises our culture and history. We are excited to be able to support Sport Northland over the coming years and hope that McKay Stadium will continue to encourage more people across Northland to get into sport and fitness.”

McKay will be taking over the naming rights for the stadium from ASB in March, with the first major event being held at McKay Stadium on 3rd April.

“With McKay being a local company and the stadium being very community focused there is a natural fit between the two organisations”.

He goes on to say that securing a naming rights sponsor will ensure that fees for local community groups to use the stadium can continue to be kept to a minimum, and that this in turn will encourage more groups to utilise the courts, something that contributes directly to Sport Northland’s core purpose of ‘enriching lives through play, active recreation and sport’.

“To have the 2019 Conbrio Northland Sports Awards as the first major event in the newly named McKay Stadium is significant, as this is a flagship Sport Northland event and is a celebration of those Northlanders that have achieved on the national and international stage in 2019”.

Under the new partnership the McKay Stadium will also be the home of the McKay Lounges and include the tenants Kensington Fitness, Refuel Café, Educare Childcare Kensington Park, Northern Football Federation, Whangarei Physiotherapy and North Tec Sport and Recreation Campus.