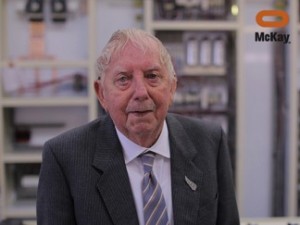 Joe was 86 when he passed away at Whangarei Hospital, with his wife, Jackie Faithfull, by his side.
Joe had a proud family of four children, twelve grandchildren and three great grandchildren; he will be sadly missed by them. Even though he was a busy man, he always endeavoured to make time for his family.

After a tough upbringing, Joe‘s hardworking reputation originated in Northland back in 1944, and due to his eye for innovative technology and business acumen, 70 years later, people from all over New Zealand and many other countries recognise his profound contribution to the Electrical Industry.

He became partner of McKay five years after completing his apprenticeship and by the end of the 1980’s he owned 100% of the business turning McKay into the largest privately owned electrical company in New Zealand. Around this time Joe connected power to over 200 Northland homes along the East Coast and Far North and worked on projects such as the Bluff Aluminium Smelter.

Today McKay Limited is a multi – national company that specialises in electrical engineering, systems integration, contracting, infrastructure maintenance, switchboards and marine electrical.The Dargaville grown business now has operations in Northland, Auckland, Waikato, and the United States and boasts blue chip clients such as Refining NZ, NZDF, Fonterra, and numerous local authorities. Even with the global success, McKay’s philosophy is one that stays true to its family heritage and Northland roots where by Joe’s legacy will never be forgotten – that is; “The harder you work, the more luck will come your way”.

Lindsay Faithfull, his son and current CEO of McKay Limited was proud to reflect upon his late Father’s career, reliving his milestones to the 250 people that attended the funeral;

“Joe trained over five hundred apprentices throughout his career and bought over $50 million in export sales back into New Zealand. My father built the company to what it is today and because of that we owe all our success to his hard work and determination”.

Aside from his commitment to his clients, Joe was passionate about the education of individuals at work and in the community. He wanted to give people the opportunity to better themselves through education and in 2014 The Joe Faithfull Scholarship Programme was established. The programme allows employees and their families to apply for financial assistance with the aim to further their education and progress their careers. Each year individuals will be selected to participate in the scholarship programme in honour of Joe’s memory.

The weeks leading up to his death, Joe still came to work every week and remained an influential figure in his business. When he wasn’t at work, he and his wife enjoyed their Oakura Bach, were he loved to take the boat fishing and was known for having a ‘stomach of steel’.