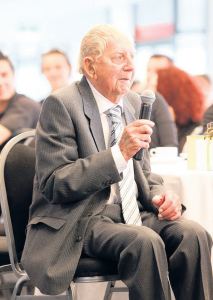 He’s the bright spark behind the electrical empire McKay and was the person who switched on the electricity in many Northland homes.
Joe Faithfull, the 86-year-old McKay patriarch, beams when asked about his lightbulb career moments.
His first was at the tender age of 14 when he asked Tom McKay for a job in McKay’s Electrical in Dargaville in 1944. His second was when he married Tom’s niece, Jackie. “I ended up with a 25 per cent share in the business and his niece,” says a roguish Joe, who last Thursday celebrated 70 years working atMcKay.

Initially turned down for the job of electrical apprentice— being one week shy of 15 years —he returnedaweek later dusting off radios and putting elements into kettles. By 19, he was foreman and managing the returnedWorld War II servicemen employed by McKay. “They had been fighting a war and returned towork under me. They brought ideas from abroad and I had the technology. It worked.” Joe jumped from apprentice to partner in five years, quickly heading up McKay as the familyrun electrical empire that now employs a team of 160 across the top of the North Island and abase in the US. He had an eye for technology and innovation from an  early age. “I was paid 3s by my school to light the boiler and it only cost 1s for a milkshake and a ticket to the pictures,” he said. Early science fiction movies such as  lash Gordon captured the imagination of the boy who would one day go on to shoot Northland into its own futuristic revolution. Space travel may have been fantasy,  but once electricity landed in the 1930s, Joe lit up a new reality for homes in the east coast and Far North. “People wanted one power point in the hallway but I tried to convince them they would need it in the kitchen—for fridges or a wireless.”

After World War II, electrical appliances were being assembled in New Zealand. “We would  assemble the fridges right there in Dargaville.” Joe spent time working in Sydney in 1950 as a “security guard” on the back of his cousin’s vegetable van. “Nobody ever stole anything. I had the waddy [club] and they didn’t.” He returnedwhen offered 50 per cent of profits from a contract between the power board and McKay to light up 200 homes along Northland’s east coast. The shrewd sparky also demanded the same for Far North contracts and so McKay decided to instead offer him a 25 per cent share in the business. “It was changing the region. Farmers had milking machines and people would stand outside and look at the houses all lit up —rapt to get  electricity.” From the Tiwai Point Aluminium Smelter in Invercargill, to a Rarotonga airport and maximum security prison in Auckland, Joe stayed 10 steps ahead to  secure these new contracts.

He married Tom McKay’s niece in 1955, having chased her for years. The couple raised four children, including the current CEO of McKay, Lindsay, an electrician who spent time in the UK working in the petrochemical industry before coming home to work at McKay. By 1980, Joe had bought out the business which had relocated its head office to Whangarei, now booming during the refinery expansion. During the past 10 years, the company has secured contracts in the South Pacific and set up a US Marine electrics base in Connecticut. It also nailed contracts for Defence Force ships, as well as luxury yachts. Recently, McKay waved its electrical wand over the two new lift bridges in Whangarei, designing and maintaining the switchboards and lifting electrics for both. Joe will continue to come into work each morning but may take the odd long weekend off to go snapper fishing.